I'm mostly taking a break from posting to Facebook.  Don't hate it, and I'm still using it.  Just not posting.  Trying out some different ways of using it to see if they are better for my well-being.  Right now I'm mosting commenting only, and I did post a couple of Christmas messages.  I'm not even sure why I'm doing this or what I hope will happen.  I just know that I have been increasingly depressed lately over my relationships with people, and that's where a lot of my relationships happen. So if I'm going to change things, I need to change the 80%, not fiddle at the edges. Again, it's not Facebook itself so don't irritate me with anti-Facebook comments.  I get it, people hate Facebook. In this case, I mostly hate me.

I view all the people who brag about wine-drinking and whiskey drinking like the rest of you view potheads who brag about their fat blunts.  I really am all for imbibing when you want to have fun, even overdoing it a lot.  But bragging about the getting fucked up part, rather than the fun and/or stupid things you do, seems inane to me.  Intoxicants are the tool, not the goal. 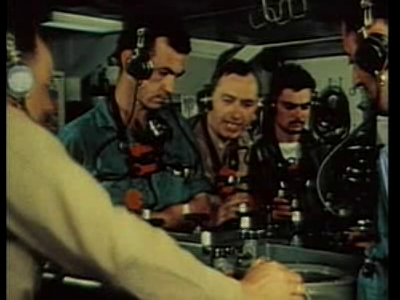 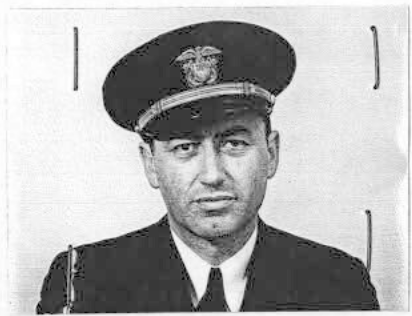 The first image is a screenshot from The Fighting Lady at 6:55.  The subject at that moment is the maintenance and operation of the ship's gun.  My grandfather was the Assistant Gunnery Officer.  The photo below is from his file and is date a year or two earlier.  I think there's a resemblance between him and the man in the middle of the screen shot.  They both have the chin dimple.  However, neither image is clear enough for me to be sure.

Last summer my aunt requested the military file for my grandfather.  It finally came through last month.  I scanned all 600+ pages a couple weeks ago and am now going through it.  It's mostly pretty boring. Lots of medical reports and service evaluations.

However, buried in it are some gems.  For instance, his 1944 fitness report lists the naval operations he participated it.  The first one listed was simply "Truk Islands, 16-17 Feb. 1944".  Looking that up, it was Operation Hailstorm, a major operation to attack what was termed "the Japanese Pearl Harbor" although the Japanese were in the process of evacuating it when we attacked.

The Wikipedia rabbit hole leads me to the Navy documentary The Fighting Lady, which was about the U.S.S. Yorktown leading up to that attack. That was the carrier on which my grandfather served. Time to review it in detail to see if George Weiss shows up anywhere in the footage.  He was an Assistant Gunnery Officer and and Supervisory Deck Watch during this period.


If the embed doesn't work, The Fighting Lady can be found at Archive.org.

I've never been big on Christmas, and after Matt died Christmas day 2001, the holiday has been especially tough.

Yesterday I put up a Christmas tree.

Pulled out my box of ornaments.  Every year from when I was little my grandparents gave each kid in our family an ornament.  These were usually from their trips abroad, but early ornaments were handmade. Since 2001, I've mostly not opened these.  Since my grandparents died in 2010, I've kept these unopened packages in a box.

After putting up the tree, I started pulling out the ornaments.  About 5 minutes into getting them out, I just couldn't.  Sat down on the couch and cried.  Kim was here helping decorate the tree.  She was futzing with the lights.  They had to be just so.  She was behind the tree grousing about something-or-the-other with the lights, and after about 90 seconds realized something was wrong and came over and petted me.

I pretty much haven't done any work on genealogy since March.  That's about to change.

I have nothing worthwhile to say about Paris or ISIS.  I write this here mostly in case someone thinks they know what I think or can guess based on previous things I've written or said.

As the Facebook people know, tomorrow I am off to Copenhagen, Stockholm, and several other places in their countries.  I am 90% packed. My electronics are charging.  I've only minor things left to do like purchase a couple more ebooks to load up on my reader (I'm not sure my ebook stores will sell if my IP is not American) and get some emergency cash to bring with.

I'm bringing my laptop, so I will be updating Facebook and possibly here.  Photos may wait until I return to get posted, depending on down time and internet speeds.

Little known fact about me: traveling anywhere alone except the US and Canada scares the hell out of me.  I'm sure I'll be fine, but I am still filled with dread.

I would like to know how I can go to California for a week, sweat my butt off, walk over an hour a day more than I do here, limit my meals to something much smaller than I do here, and come back weight a pound more than when I left.
Collapse