Disembarkation from the cruise was pretty damn easy. Wait with Mary Rose for our section (#10) to be called on the boat, then head off. Insert Sail & Sign card one last time to let the computers know I wasn’t on the boat any more. Wait by the carousel to pick up my bags. Wait in line at customs. Wait on the curb for the shuttle back to the parking lot. Only the last was much of a pain, as there was mess of people milling around the shuttle pick up area, and at least three shuttles run by the lot drove by without stopping. Finally a coordinator of some sort put us on a shuttle that was run by a different company, but they work together or something. That meant the van went by a different lot first, which wasn’t an inconvenience.

Mary Rose wanted coffee, but there aren’t a lot of Seattle style coffee shops in Miami, so I’d looked one up in Fort Lauderdale. It was a 30 minute drive, but Mary Rose’s flight was out of Fort Lauderdale anyway. Unfortunately, Brew Urban didn’t have any food except a couple of pastries, and they were out of soy milk to boot. We got brunch at the nearby Old Fort Lauderdale/O-B after a 40 minute wait instead. Food was pretty good after the crap Carnival served.

Then we headed to Hollywood Beach to walk the boardwalk, where I figured we’d find a cafe or coffee shop we could hang out at and people watch or surf the web. But the boardwalk was really windy, and there weren’t any coffee kinds of places. So after an hour or so, I drove us to downtown Hollywood Beach where there was a Starbucks. Incidentally, filled with people camping at tables not drinking coffee.

After a bit, we checked in at the Holiday Inn Express and waited for my friend Lenei, a resident of Fort Lauderdale, to show up and take us to dinner. Lenei picked a place she’d heard good things about called Aruba, but when we arrived it had switch to night club mode, so we ate next door at the Village Grille. Mary Rose ate a giant chicken sandwich on her own.

First thing on waking up was to deliver Mary Rose to the airport for her flight home. That was easy. 10 minutes there. 10 minutes back.

Later in the morning, I headed to Lenei’s place. The plan was to toodle around Miami and that’s what we did.

First stop, breakfast at the Floridian in Fort Lauderdale. Tasty huevos rancheros style breakfast. Then down to Miami to drop off a tire at Lenei’s mechanic. This is the cool part. King Automotive is right in the heart of a mural art district. Dozens of murals decorated the buildings around there. So we walked around and I got snapshots with my camera. Click through for bigger versions and more pictures. 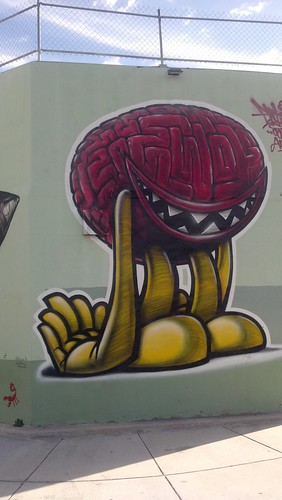 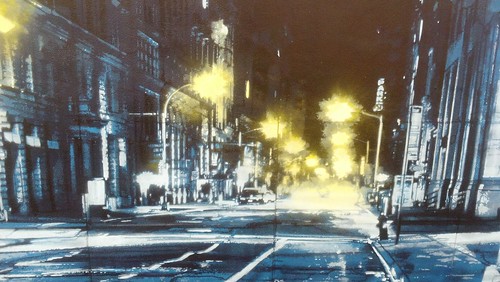 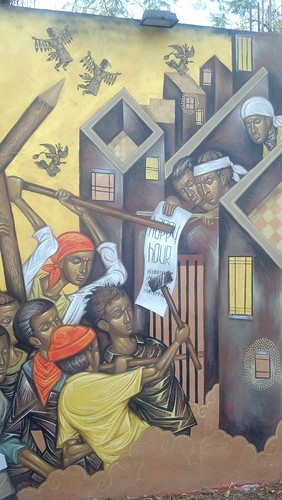 Next stop, a little video store to pick up bootleg DVDs for Lenei to watch later.

Next stop, Little Havana after driving by the Miami-Dade Library so I’d know where it was the next day. At Little Havana we stopped by a small park where old men (mostly Cuban) played chess and dominoes. A few more blocks brought us to a market with a restaurant called Nuevo Siglo. Lenei ordered for me, as I know zero Spanish. A big hunk of cooked meat and a garlic dipping sauce. Delicious. Also stopped by the nearby Casa De Los Trucos House Of Costumes where I found a couple of masks that would be perfect for next year’s sparkle party.

Last sight of the day was on Virginia Key, where Lenei took me to see Jimbo’s Place. I don’t really quite know how to describe Jimbo’s. Lenei said it wasn’t what it was 6 months before, the last time she’d been there. There were a couple of bulldozers there and a big empty place where a bunch of shacks apparently had been. No sign of Jimbo.

After that, Lenei treated me to a home cooked meal, and I crashed on her couch.

Lenei had to go back to work. My plan was to spend some time at the Miami-Dade library looking up obituaries. A few people in my family tree retired to Florida, so I wanted to dig up some information. The library only had obituaries from Dade county newspapers, and none of the three people in my tree who’d died in that county had obituaries published there. Struck out.

Instead, I drove to Fort Lauderdale and hung out in a Starbucks for a bit and then headed to the Broward County Library. There I started writing these travelogue posts and did a bit more research online into Florida relatives to make sure I wasn’t missing anything.

For dinner, Lenei and I partook of the fine food served at El Guanaco Taqueria Y Antojitos, a Honduran place in Oakland Park. I may have had the best enchilada I’ve ever had. Juicy and spicy without being drenched in enchilada sauce. If you are ever in the area, go to this restaurant. It’s super cheap to boot.

For our last task of the evening, I helped Lenei transport a kayak she’d stored at a friend’s house. Getting it strapped to the top of her Jeep can probably be done with only one person, but my presence makes it easy. Her friend travels for a living promoting Geico insurance, and also sells belts. For helping her fix her printer, she gave me a very sparkly belt buckle which I will gift to Keenan on my return to Seattle.

Before crashing for the night, Lenei popped in one of the DVDs she purchased the day before, Attack The Block. This was a pretty damn good movie. Fairly short, but that made it better. One story with very little to distract. Just after mugging a woman, a gang of London teens finds themselves in the center of an alien invasion and under attack. The Block being their project-like apartment building with something like 19 stories.