The morning of the fourth I woke up in Amarillo, Texas. You know that part of Texas that sticks up and lies between New Mexico and Oklahoma? It’s flat and boring. It’s part of Texas because New Mexico and Oklahoma didn’t want it. Also, Texas does not believe in rest areas. Instead, they have picnic areas. The difference is that there aren’t any bathrooms. If it weren’t for McDonald’s I’d have had to drive all the way across the state without urinating.

Oklahoma is also flat. But not quite as flat as north Texas and it has trees to decorate it in places. The only other thing of note this day was that I stopped at Logan’s Roadhouse in Oklahoma City for dinner. The schtick at this restaurant is that they give customers peanuts to snack on, and you can throw the shells on the floor! Which people seemed to be doing with abandon. But the gimmick seemed very look ma I’m throwing peanuts on the floor! rather than a big amount of pent up desire to throw food on the floor.

I stopped for the night in Maumelle, Arkansas, just outside of Little Rock. A long day of driving, but relatively easy given that the interstate was very straight and traffic was pretty light.

The 5th was to be a lax travel day by intention.

First thing on the agenda was to head just south of Little Rock and visit the Pinecrest cemetery and look for a relative who might be buried there. I’d found a reference online that said the wife of my grandmother’s cousin was buried there. The office was able to quickly look her up and found where she was buried. When I got out to the location, my grandmother’s cousin Leo Reichle was buried there as well. I was hopeful I’d find him there, but wasn’t sure. He was born in Illinois and lived in Ohio after the war. So far as I know, his only connection to Arkansas was that his wife Geneva was from there.

Anyhow, that trip was quicker than I expected, so I had some time to kill. While I was driving through Little Rock I saw a sign for the Clinton Presidential Library, so I turned off the interstate to visit. The building looks quite impressive. However, the exhibits were a little more canned than I prefer. The one interesting things was that they have all of the President’s daily schedules in binders for public perusal. Redacted in a fair number of places, but still cool to see. 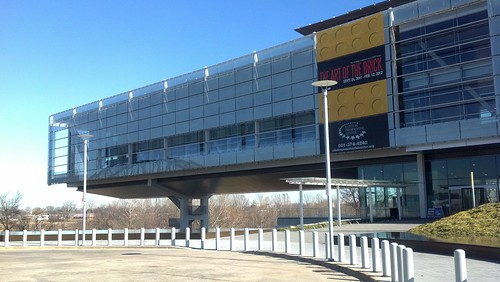 After that, I headed to Jonesboro. It’s a little off the direct path to Miami, but my friend Renay lives there and I wanted to meet her in person. She’s a former book blogger who still keeps her toe in the pool writing at Lady Business, which is a great feminist blog that focuses mostly on books and media. I had a great visit with her.

Then I was on the road to Memphis where I planned to stay for the night. Memphis freeways are confusing and seemingly under a lot of construction. The lanes are narrowed for that work, light was dimming right about then, and there was lots of traffic on the road. All that combined to make me really uncomfortable driving there. In on incident, a car pull up at a red light in the right hand turn lane. He sorta veered right but kept going straight at a high rate of speed, right through the red light. Also bypassing the long line of vehicles waiting at the light. Dangerous and assholish.

But as I got to Memphis it was about 6 and I realized I could drive some more. So on to Tupelo a few more hours down the road. Tupelo is a hilarious name, so I was chuffed to stay there.

This was the longest driving day of the trip. My plan was to drive to Orlando and crash the night there. However, the night before I was looking at the web site for the Florida Turnpike to figure out what kind of change I needed to have for tolls, and what lanes to avoid and which ones to take. I didn’t want to get stuck in a Sunpass only lane because I didn’t know what they looked like. Unfortunately, their web site is crapola and I couldn’t figure it out. I posted that on Facebook, and a high school friend responded that I should head to St. Petersburg where she lives. As that meant a night not having to check into a hotel, that became my new plan. Also, it avoided the turnpike.

The drive to Montgomery was easy. But after that Google’s directions took me a way I probably wouldn’t go again. See, there’s no interstate from Montgomery toward eastern Florida. I should have headed directly south, but Google thought heading east through Georgia would be the fastest route. Normally I’m finding that Google’s estimations are about 15% to 20% high. But in this case the estimate for driving time was spot on. The roads through southeast Alabama and southwest Georgia were windy and slow. While not exactly picturesque, it was a nice drive. But as I didn’t want to pull into St. Petersburg at midnight, it was the wrong choice.

So when I finally got to I-75 and headed directly south toward Florida, I pushed the driving hard. Normally I’ve kept my speed under the speed limit and stopped regularly for breaks. On this section I was going over, and I only stopped once. I pulled into St. Petersburg about 9:45 local time, and found Stephanie’s place around 10.

Her family has a really nice house on Treasure Island, which is an upscale area on the water. Her three boys and husband were already asleep, so we chatted a bit before both of us crashed.

Since the drive to Miami from St. Petersburg was only about 4 or 5 hours, I could sleep in a bit. When I woke up, Stephanie was already back from her job. She was still handling the phones via her cell phone though. She is an office manager type for her husband’s medical practice. Her boys really wanted to show off their Nintendo 3DSes, but I have to say that was pretty boring. More fun was the giant map of the world her oldest has on his bedroom wall. They played a game with me where they named a place on the map and I had to find it. They managed to stump me about half the time.

I got driving just before noon. I took the Sunshine Skyway toll bridge south instead of a toll free route. It had spectacular views and the other route didn’t.

The only item of note from the drive is crossing Alligator Alley, I-75 pretty much straight east to Miami through the Everglades. No real exits. Only a couple points of interest. The watery swampy part seemed to start about halfway across. I suppose there are places one could get off and go exploring the Everglades, but I wasn’t going to be doing that this trip.

Once in Miami, I decided to stay at the Quality Inn near the airport. This was based on having stayed at a couple of other Quality Inns already and finding they had reasonable prices and good Wifi. This one had neither. I used the guest laundry to wash everything I’d worn on the trip so far, and re-packed my bags so that I wouldn’t be taking some items on the cruise with me. No need for the heavy jacket that was necessary crossing Idaho and Utah.

I’d hoped to be able to Skype with a group of people from Community for Youth that were doing a reunion back in Seattle, but that didn’t happen. Not sure the Wifi could have kept up anyway. It was awful.

Dinner was at a fast foodish joint called Taco Beach just up the street. Not quite fast food, but not really an actual restaurant either. I can’t think of a comparable type of place in Seattle. The enchilada was delicious though, and they had a match on the televisions from the Mexican top flight. The match turned out to be not particularly well played.