I haven’t had a lot of time to write the blog entries I promised myself I would. Although I had a fair amount of free time on the cruise, I haven’t had free time otherwise. Until now. Upcoming (including this one) are a few catch up posts.

One administrative item to note first. I am maintaining a Grand Road Trip travel map on Google Maps. It has all the stops and points of interest of the trip. Not a whole lot in the way of notes though. It’s mostly for me to remember things along the way, and for other folks to get an idea of where I have been. I am not adding much in the way of details of what I did at each place.

Also, it’s a very useful companion to these blog posts, as I don’t plan on writing up the exact routes in them.

The trip started off quite well, though really a bit too late. Deirdre hosts a New Year’s Day party most years where she serves Hoppin’ John. I needed to be on the road well before that, but she wanted me to stop by anyway. I got loaded up and headed to Deirdre’s about noon. There she served pancakes (I think, I’ve forgotten already) and bacon, and packed me some cookies and a ginger brew for the road. Actual departure time from Seattle turned out to be about 1:15 p.m.

Of course, I freaked out and thought I might have left my door unlocked. Luckily, I could stop, email my building manager from my phone, and ask her to twist my doorknob and make sure. I got a reply a few hours later. I had locked it up tight.

Day 1 was about 10 hours of driving. I stopped for a quick break at the Selah Rest Stop on I-84 near Yakima. That’s where the bridge photo below was taken. It’s kinda pretty for a bridge. I stopped for a couple of quick rests and one gas station before finally deciding to call it a night in Mountain Home, Idaho. The drive between Seattle and Boise is one I’ve done many times, as I loved in Boise for about a year (1998).

I didn’t get an early start, but it was much earlier than day 1. A quick (and free) breakfast at the restaurant adjacent to the Best Western and I was on the road. The route to Salt Lake City is one I’ve driven 3 times before as well. I do like the views from the interstate in southeast Idaho as a driver turns southward toward S.L.C.

S.L.C. has traffic and lots of it. To me it’s a good illustration of what happens when a metro area invests heavily in roads. People fill roads to their available capacity in cities. If more are built, people move to places and use them. There really isn’t unused highway capacity in a city. Also, S.L.C. did not pay for those roads by themselves either. Those are new and pretty and got a lot of funding from the federal government.

Around Provo I got off the Interstate and took US 6. The road is mostly a 2 lane highway, and it also has some incredible views. I stopped in Price and got myself a grilled sandwich at a little drive in called Sherald’s with a very overworked waitress. It was a damn fine sandwich. While waiting, I chatted with a couple of adolescents who were waiting for their burger. They were not particularly bright, but enthusiastic and charming. 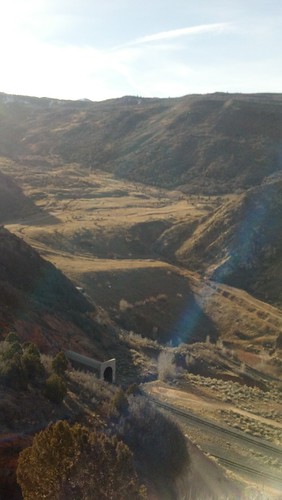 Canyon viewed from US-6 in Utah

Unfortunately, the evening was already upon me by the time I reach I-70 near Green River. That meant I didn’t get to see what must have been great scenery as I drove by Arches National Park and Canyonlands National Park near Moab, Utah. Moab looked like a nice town, though a bit touristy. I drove through and made it to Cortez, Colorado for the night, where I got a room at a really cheap motel. The temperature was in the high 20s, which seems downright cold to me as I write this from balmy Fort Lauderdale with a temperature in the 80s. I actually brought my road beverages into the room at night because I didn’t want them to freeze in the car and burst.

I woke up pretty early and drove into the main part of Cortez from the outskirts for a breakfast at the El Grande Cafe. It is the kind of place where the old farts for their breakfast every day and the breakfast waitresses all call you honey. The people were friendly, but the huevos rancheros were awful.

Day 3 was the first day I did any actual sightseeing at all. I figured my chances of being in the area again anytime in the next few decades were pretty slim, so I was gonna take the opportunity to stop at 4 Corners, and stand in the one spot where I can be in four states at once. The road to 4 Corners goes through the Navajo reservations in New Mexico. There’s really nothing there. Just a small plaza with a survey marker in the center at the exact spot where the states touch. The local tribes have set up booths around the plaza to sell trinkets to tourists. I bought a bunch. 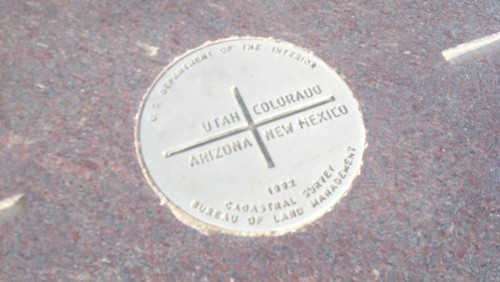 Afterward, the road took me into Arizona briefly before I hung a left toward Shiprock in northern New Mexico. My original plan had been to drive a more northerly route from Shiprock to Albuquerque and then take a left. Just cause. However, Deirdre presented another option when she was serving me bacon. Her hometown was Tohatchi, which is about an hour south of Shiprock. It’s on the way from nowhere to nowhere. So I routed through that town to see what makes a Deirdre.

I did stop and pull into the Tohatchi High School parking lot to get a quick phone snapshot before continuing on my way. At the edge of Tohatchi I saw a fellow hitch-hiking on the side of the road. Since I was going that way I pulled over and let him hop in. I saw 4 other hitch-hikers shortly afterward. Deidre tells me that’s a way of life on the reservation. I just thought it would be nice to help a guy out (I’ve even given rides to gutter punks in Seattle before. The guy’s name was Rick, and he needed to get to the hospital in Gallup, though I’m not sure why. He didn’t appear to be injured himself. His accent was really thick, so I couldn’t understand much of what he said, and neither of us are the talkative sort anyway. 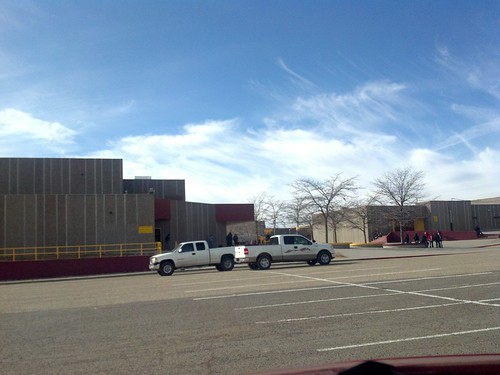 After dropping Rick off and swinging by the post office in Gallup to deposit a batch of post cards, I headed east on I-40. New Mexico had a lot more elevation changes than I expected, particularly dipping into Albuquerque and then climbing the ridge east of that metro area. The earth in the state is very reddish as well. Once I crossed into Texas though, everything flattened out. Final stop was at a Quality Inn in Amarillo.