While in Wisconsin earlier this month, I wanted to find out some information about my great great grandparents, Clara and Anton Weiss. I knew when Anton died because of some scriblings in a book a cousin found at my great Aunt Babe’s house:

Most families at the time wrote down births, baptisms, christenings, deaths, etc. in their family bible. The Weiss family? That’s the inside of 2010 Popular Quotations of Emo, a book published in the late 1800s and early 1900s. Why that? I don’t know. My second cousin Christopher Weiss thankfully snapped a photo of that page. I now know whoever wrote that, but it was between 1911 and 1914, because it has Anton’s death but not Clara’s.

I looked through the microfiche holdings of the Wisconsin Historical Society and found a copy of Anton’s obituary a few days after his death in the Cassville Index. I was going to include that obituary here, but I just found out that it didn’t upload properly or something to my archive, so I do not have a copy! Fuck!

Anyhow, the obituary stated that Anton had been buried in the Cassville Cemetery. So I drove two hours to Cassville that night and got a room in a really rundown motel. As best as I can tell, there are only two places of lodging in Cassville, which has about the same population today as it did in the 1880s. The people at the restaurant there were not friendly either.

The next morning, I drove up the bluff to the cemetery outside of town. I’d guess the cemetery is a three or four acres in size. Not super-large, but not tiny either. I parked and looked around. 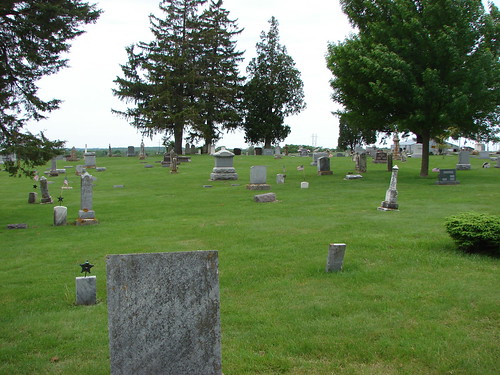 The rows aren’t particularly neat, and I didn’t immediately see the marker. My fear was that the graves would be unmarked. I could have written to the cemetery association, but the turnaround time would have prevented me from getting a reply before I returned home. Tombstones tend to blend together so I went systematically. I walked crosswise to the rows, straight out from about where that photo was taken. Got to the end, moved over about 10 feet, and walked back. It was on the second return leg that I looked over (outside of my 10 foot range) and saw the headstone a ways off. You can see it in that photo just behind the tree.

Here’s the plot close up. 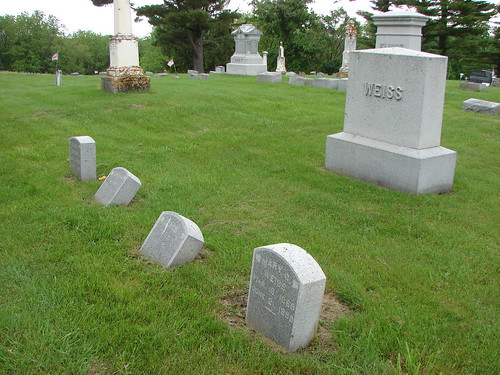 That’s a huge headstone! Pretty much my entire family in Washington is buried at Evergreen Memorial Park, which means flat markers. The Sorenson markers I found at Forest Hill Cemetery in Madison were actual tombstones, but they were maybe 6 or 8 inches tall. That thing is about 4 or 5 feet tall and wide, and around 18 inches deep above the base. It is a massive piece of rock!

Buried in the plot are Anton and his wife Clara. She died in California 3½ years after him at the home of one her daughter Celia Klindt in Ontario California. I took the year of death from the marker and went back to the Historical Society and looked up her obituary to find that out. Also buried there are two of their daughters, Mary and Agnes. I know Mary died in Colorado, and Agnes in Cassville.

After getting a few shots of the individual markers and the headstone, my next task there was to photograph every tombstone in Cassville Cemetery. Yup. Every damn one. I suspected that I’m related to additional people buried there, but I didn’t know who. Since I won’t get back there for a while, I figured I might as well walk the entire cemetery. I’d purchased an 8 GB memory stick for this, which gave me room for about 2,600 photos. I took about 1,550 photos there.

The side with the older markers took a long time. Some of the markers are nearly unreadable. So I took multiple photos from different angles hoping to catch the shadows different ways so I could read them. At first I tried to dictate into my phone some of my guesses as to names while I was there to actually touch the markers and feel the words. However, after one such marker I decided I didn’t have the patience for that and stopped.

In addition to the Weisses, I also found the graves for Clara Weiss’ brother Peter Voigt and his family, and the first husband of one of Clara’s sister. I’ve barely begun to track down the Voigt branches. Also buried in the Cassville Cemetery are a couple dozen of the Grimm family. I’m not directly related to any of them, but William Hugo Grimm Sr. was the first husband of a third great aunt, Julia Elizabeth Ryan. They had one child and then divorced. Theirs is one of the earliest divorces in my family tree. Julia Ryan remarried and moved to Colorado with her husband and William Grimm’s daughter.

After all that, I drove to three more cemeteries, two of which I also photographed in their entirety. Although they were smaller. And the bugs started getting to me so I gave up 80% of the way through the last one. But it’s 1:45 now, so end of story.